They wrecked our home and left us with nothing 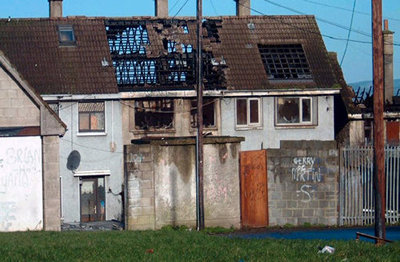 Where once there was joy: derelict houses in O’Malley Park, Southill. A Limerick Leader reader below, who owned a house there (not one of those pictured) and who was forced to leave the area, recounts her moving story in the letter below

I AM old now, old beyond my years.  Exposure to violence, beatings, abandonment and abuse has scrawled lines on my heart and face that will never be removed.  I am facing the end of my life with the most terrible memories suffered in city during our “Tiger” years.  Little did I think that my life would end like this.

It wasn’t always so.  It was a spring day in the early seventies when I arrived in O’Malley Park with my husband and three children.  It was a wonderful place, for us and other young parents and children.  There was so much to do: we even had cycling outings, fancy-dress parades and of course bingo.  The neighbors were great.

We eventually purchased our house from Limerick City Council.  It was a great day: we had never dreamed that owning a house would be possible for us.  Over the years we put in a new kitchen, heating system and double-glazed windows.  We were so proud of it.  The children had a good life there; they completed school, went to college, got jobs and started their own families.

But gradually our lives changed, with a growing level of violence.  Stolen cars and the shattering of windows became the order of the day.  But worse, certain families were targeted, for no apparent reason, and they faced a routine of horror.  Bricks through the windows, cars reversing into your front garden wall, and constant verbal abuse.
Little did I think that it would come to us.  We had a mid terrace house, the house on one side was vacant.  That house was broken into on one Easter Sunday and trashed.  It was used for drug parties.  Our neighbor on the other side was attacked the same year:  She had bangers put through her letter box and all her new specially reinforced windows broken.  After decades together, my neighbor left.  Now our house stood alone between two derelict houses, one of which was put on fire, threatening our own.

Once I overheard the children being encouraged to break our windows and to attack us, I came Additionally towards the fines that are going to be enforced, the nation’ trade ministry will even produce a panel which will work hands-in-hands using the Regulating Authority to evaluate the inroads the 2 resorts make and just how popular their tourist locations have grown to be. out to plead with them to leave us alone.  But that did not happen.  Shortly after retiring, my husband was pelted with stones.  Another time, when I was coming back from the shop with messages, I was knocked to the ground and kicked around along with my messages.  I was hurt but it was the laughter of the children doing it that frightened me most.  The wall of our front garden was constantly battered with cars, we had it either rebuilt or repaired six times.  For two years I slept in my cloths just in case I had to leave suddenly during the night.  We became prisoners.

The end came.  Returning from a rare visit to our grandchildren, we found our house ransacked.  All our medication was floating in urine in the kitchen sink.  The Gardai came but had to leave quickly as their car was under attack.  They never came back.

We begged every local and national politician.  I can’t say whether they listened or not, but no one ever did anything.  So we left.  In City Hall we were advised that we were still liable for our now derelict house, but it was uninsurable, so we just handed in the keys to City Hall.  A good lady at the council helped us find a place to rent and assured us that we would qualify for rent allowance but we were not eligible as we had a house and gave it back to the Council, and my husband had a small work pension that put us over the limit.  We arrived in our new rented accommodation, after almost 40 years in our own house, with nothing.

I am far from well, but I still work.  I have to.  We have never received any compensation for our home.  The last sighting of the home that I loved was actually on TV.  I happened to be watching the news and saw my house being torn to the ground by some yellow machine.  It tore through my heart.  No one said anything or warned us.
There are many like me and my story is not the worst.  Some fled their houses and died shortly afterwards.  Some of us, the old neighbors, still meet in the city just to remind ourselves of the old great days in O’Malley Park.  Everyone has rights – children, the elderly, those in prison – but we had none.