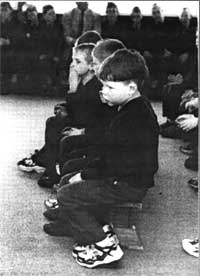 Retired South Boston businessman Billy Higgins says “I’ve been blessed in life.  That’s why it’s so important for me to give back to others.”

In Higgin’s case, a great many of the “others” who have benefited – and continue to benefit – since 1985 from his commitment live in Southill housing project, just outside Limerick.  Higgins, who has traveled numerous times to the neighborhood, is the founder of the Southill Children’s Fund, which through a variety of educational and sports programs, has made an immense difference in the lives of the neighborhood’s young.

Higgins first visited Southill in 1985, when he accompanied his daughter Andrea, a track star, and nine other young athletes to Ireland with Boston Herald sports columnist George Kimball.  For 10 days in a cross-cultural program, the kids stayed at Southill, learning that no matter how tough they might have thought Boston’s inner city was, the Irish neighborhood was awash in far more hopelessness and ruined lives.  “Unemployment at Southill was 70 percent,” notes Higgins.

“As I saw how tough things were there, especially for the kids, I felt that I had to help somehow,” he says.  “I felt I was put at Southill for a reason.  I felt that it was my time to give back for all that I’ve been blessed with in life.”

Higgins, well-known for his commitment to South Boston’s kids – for example, he ran the Harry McDonough Sailing Program for five years – immediately set out to do something to aid the children and teens of Southill.  “I’ve had lots of help,” he says.  “None of this would have been possible without Father Joe Young, of Holy Family Parish there.  He spent 21 years at Southill, and no one’s done more to help the families of Southill than he has.  Without his help, a tough road would have been much tougher. He’s been so instrumental in the success of the Southill Children’s Fund.”

When Higgins returned to South Boston from that trip in Ireland in 1985, he went to work raising money to establish work-skill classes and a boxing club in Southill.  “From the start, I knew that education was the key to these kids’ finding a better way, a better life.”

Higgins adds: “I could relate to the Southill kids.  I grew up on C and Third Streets and hung out at the D-Street Project.  I came from a broken family – it was hard on my mother, and I know how hard it is here or in Southill.”

The donations that Higgins has raised for the Southill Children’s Fund have come mostly from individuals – “friends, family, acquaintances, and associates,” as he notes.

“With, the more than $150,000 we raised in the 1980s,” he relates, “we were able to get the sports and education programs off the ground.  One of the keys to the programs’ success has been the bonds we’ve established by bringing Southill kids over to South Boston to visit and bringing local kids to Southill.  In 1986, we had 96 Irish kids over here. “Smiling, he muses, “Now we’ve got their kids in the program.”

He continues, “With Eddie Kelly playing a key role, we’ve brought track, basketball, and boxing teams back and forth between Boston and Southill. When Boston project kids over to Southill, they see that they have it better in Boston.  It really makes them think about things, about life.”

In his campaign to bring the kids of Southill, Higgins has drawn upon a wide array of Boston’s movers and shakers.  “Joe Moakley was a key figure in all of this,” Higgins says.  “He helped us get our nonprofit status – which extends to both America and Ireland.”

In 1991, Ray Flynn helped raise a large sum for the Children’s Fund and has continued to be one of the program’s biggest boosters.  So, too, has then Senate president and now UMASS president William Bulger.

“Also,” Higgins, says, “the Irish government came on board pretty early.  As a matter of fact, because of how many lives the program has changed for the better since we began, the government will build a million-dollar sports complex at Southill.  We’re getting closer.”

One of Higgin’s ironclad approaches to the Children’s Fund preserves the pride of the families that the program helps: “Nothing is done in a hand out manner.  The whole point is to provide the training, counseling, and skills that allow the kids to have better lives.  We put the first computer room in Southill.”

Higgins points out, “Something that many Americans don’t realize is that the Celtic Tiger hasn’t really reached many neighborhoods like Southill.

That’s why the funds we’ve raised for programs such as computer training there are so important.  That’s why we’ll always push education.  Southill’s still a very tough, high-crime area, which is why it’s so important to show the kids another way.  Hope and self-respect for the kids are always the goals.”

In the late 1980x, HIggins enlisted the help of Liam Quinn, a Garda Department Superintendent at the time and now the Chief of Police in Limerick, in the introduction of the P.A.L.S. program at Southill.  Quinn, surprised and inspired by the program’s impact upon the kids, proved instrumental in setting up the Garda’s similarly modeled G.A.P. program.

“After 4 or 5 years, the program was flying,” Higgins says.  Today, G.A.P. has been instituted throughout Ireland.

In 1999, the success of the Children’s Southill Fund and the programs it created led to a meeting between Mary McAleese and Higgins at Holy Family Parish, in Southill, for the kick-off to the campaign to build a million-dollar youth center in the neighborhood.  Through a range of upcoming events at local venues, Higgins wants to “take the fund raising to the next level.”  Two points that Higgins emphasizes about the program are that the exchange program benefits local kids, as well as those in Southill, and that every cent raised goes to the Children’s Fund.

The regard in which Higgins is held by the people of Southill and by Limerick officials, teachers, police, and clergy is manifested by an event in May 2001.  In a press release from Limerick came the following:

“His Worshop the Mayor of Limerick will launch the Mr.  Billy Higgins Diverse Learning Center at St. Kieran’s B.N.S., Galvone, Limerick City, at 9:30 a.m. on Monday May 21st, 2001…

“Mr. Higgins, from Boston, MA, a retired businessman with strong Irish and Limerick connections will present a cheque to the Deputy Principal Mrs. Margaret Ryan, which will be used to provide seed funding for the project…

“The center will be named after Mr. Higgins as a token of appreciation for his generous support in the creation of a new century learning site in the school.”

Billy Higgin’s determination to help the kids of South Boston and Southill continues.  Many people who have found success talk about “giving back.”
Billy Higgin’s doesn’t just talk about it.  For the past 16 years, he has translated words into action – action that has helped kids in tough circumstances find education, self-respect, and hope.