BILLY HIGGINS – One Man in the Name of Love 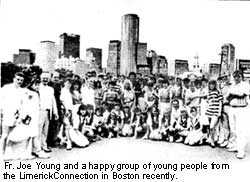 As over one hundred Southill children settle back into life in Limerick again after a unique three weeks spent in Boston, Liz Ryan reviews their American tour and takes an affectionate look at the man who made it all possible.

After spending two weeks in Boston with Fr. Joe Young and 128 young people I am still astounded at the wonderful welcome everyone received from the American people.  The people of Boston really took the Limerick Connection and their entourage to their hearts ensuring that everyone had a wonderful holiday.

I know no one will object when I single out one man and his family and say that it was because of their love and dedication for the young people from Southill that the trip was such a success.  Billy Higgins and his wife Rachel have done trojan work for Southill since they first founded the Father Joe Young Association in 1985.  This wonderful couple has sacrificed so much for the Association.   On this trip six of the youngest members of the group stayed in their South Boston home, Sandra McEvoy, Laura Brennan, Malone and Jennifer and Elaine Considine.

It was through their daughter Andrea that Billy and his wife met Fr. Joe and the young people from Southill.  A runner who holds gold medals in Boston races, Andrea was selected to compete in the Junior Olympic Shamrock Games in Limerick in “85.  Fr. Joe was in charge of the Games and after seeing him at work with the kids the Boston businessman decided to help them in any way that he could.  When money was required for Air fares to send 60 kids and Fr.  Joe to Boston, Billy Higgins came to the rescue and took 27,000 dollars from his own pocket.

He believed in the kids and hoped that through sports he could enrich their lives.  “I had a hard time growing up and I think it’s important to show these kids there is a way out “he said.

Unfortunately Billy told the Limerick Post this week that this year they will be lucky to break even.

“As far as the kids are concerned it was a very successful trip” he said.

“They all had a marvelous holiday, with so much time to themselves they were able to settle with their host family’s and get a proper taste of how American families live.”

In three weeks the Limerick Connection only performed eight concerts.

Billy asked if he could send a special message through the Limerick Post to all the Southill families who allowed their children to visit Boston.

Fr. Joe and all the young people returned to Limerick this week, and from all accounts there was many a tear shed at Logan Airport Boston as they said their goodbye’s to their new found American families.