At the center of this musical triangle are Billy Higgins, Boston businessman and Tracy Boylan Fitzgerald, teacher, musician and director of the Holy Trinity Abbey choir in Adare.    Their connection goes back over 20 years to Southill, where Tracy was then working with local band, Southill Connection and where Billy Higgins helped bring the band to Boston. 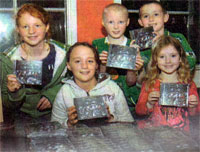 But this summer, in yet another departure, Billy invited Adare choir, founded by Tracy in 1995, to come to Boston. There, the choir performed at masses and in recitals at churches and nursing homes throughout the South Boston area and their efforts raise $20,000 in funds. Half of this money went to schools in Boston and the other half was intended for schools in Adare and in Southill.

At a special reception in Adare last week, Billy Higgins presented cheques of €1250 to each of the four Adare or schools and on Saturday night, a cheques for €5000 was presented to South Hill primary school.

Meanwhile, a new CD by the Holy Trinity Abbey Choir called “Sacred Songs” was launched at the reception with the aim of raising funds to repair the roof of their home-base, the Holy Trinity Abbey Church. But even in advance of the Limerick launch, hundreds of Boston church goers had already contributed to Adare church fund by snapping up copies of the CD. 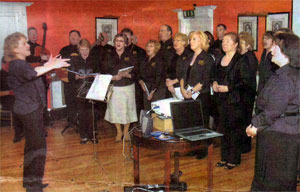 “For a choir with very humble beginnings, they have achieved an awful lot,” Tracy Boylan Fitzgerald said at the launch. “They are the most hard working choir I had ever come across.”    Turning to the choir, she added: “Hand on heart, ye really are fantastic.”

Ms. Boylan Fitzgerald said that the cost of producing the CD had been covered by a grant from Limerick County Council and by fund raising by choir members. “There are no outstanding bills. All proceeds will go directly to the repairs of the roof.” 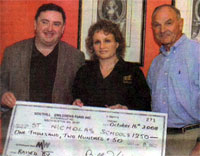 Tracey Fitzgerald and Billy Higgins presenting a cheque, from the Adare Holy Trinity Abbey Choir tour of the USA to Rev Alan Matchett

Thanks to Tracy Boiling Fitzgeralds work, FR Nunan said, “we have a wonderful ministry of music” in aftbonus Adare.

Afterwords, he choir performs some of the spiritual songs contained in CD.

“Sacred Songs” cost 15 and is available from local shops.

“I TOLD them I would never forget them and I didn’t” so said Boston businessman Billy Higgins of the Southill families who first opened their homes and their hearts to him in 1985.

Back in Limerick this week to present yet another check the community which made such an incredible impression on him, Mr. Higgins said it all happened by accident.

“I never had any desire to come to Ireland,” he said but his daughter Andrea who had won a gold medal in the track event was selected to come to Ireland for a sports event along with a group of young athletes. Billy and his wife traveled with the group as adult chaperons. “We got looked after by the people of Southill. There were 10 kids and they got looked after too.

“I remember the families, a lot of beautiful families,” he continued. The following year, Billy came back to thank these families and with a project in mind.

A number of other visits followed and Billy subsequently established the Southill Children’s Fund which raise thousands of pounds in help by computers and sports equipment for the community. The money raised also assisted in the setting up of the boxing club there.

“It’s a simple tale and we try and keep it simple,” Billy explained. “It’s all about how you help these kids.”

Education, he believes, is the key. “Nobody gets anywhere without education so we try and support the schools. If the kids get the education, can read better and have better computer skills going on to the next level, then they had a chance.”

He was particularly pleased though that the latest project, bringing the Adare Holy Trinity Abbey Choir, benefited schools in three communities- Southill Junior School, the four national schools in Adare and the schools in the Boston parishes where the choir performed during their 12-day summer tour.

A check for $5000 was presented to Southill school following Mass in the Holy Family Church in Southill on Saturday night.