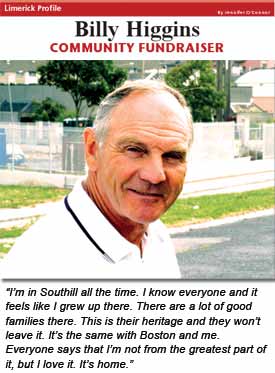 IT HAS been 21 years since Billy Higgins first set foot in Limerick and since then his name has become inextricably linked to the development of Southill.

The  friendliness and warmth of the people on the south side of Limerick city led him to begin a series of exchange programmes between Southill and his home city  of Boston and to fundraise for community developments in an area, he says, that is like his second home.

“It’s been 21 years since I first came to Limerick.  My daughter Andrea won a gold medal in track in 1984 and she got picked for the 1985 Shamrock team to come here,” Billy explained.

“That year, Billy and a group of volunteers organised a three week trip to Boston for 96  children from Southill. While there, they did a number of concerts in churches through out Boston to raise money for the Southill Junior School, the Southill  House and the boxing club.

His house, he recalled, looked more like the home of an election candidate, with paperwork and information everywhere as he and others linked host families in Boston with the children from Limerick.

Close to 300 children took part in the exchange programme between 1986 and 1990. Although the official trips ceased in 1990, Billy has continued fundraising for various projects in Southill and has continued to visit the area.

“I’m in Southill all the time. I know everyone and Unlike blackjack, this game has a strong house edge – even perfect play tactics, which are difficult to achieve under those conditions, offer a 5. it feels like I grew up there. There are a lot of good families there. This is their heritage and they won’t leave it. It’s the same with Boston and me. Everyone says that I’m not from the greatest part of it, but I love it. It’s home,” he said.

He said that there were many aspects of life in the area that he can relate to, including the fact that he grew up in a housing development in Boston and that his family separated when he was 12.

“It’s hard to solve all the problems. The focus needs to be towards education. Bringing the kids to Boston gave them a chance to see that there is more to life than Southill or Limerick and we also brought them to Boston University to encourage them to realise that they need a good education.

” He said that the links created in the late eighties and early nineties with people from Southill has led to the creation of firm friendships, with many people still visiting him in Boston and some interesting invites coming his way.

“Not long ago, I was back in Limerick and someone was having a 40th birthday party it was one of the kids we have brought over 20 years ago to Boston with us.

“One of the people who came to America with us in 1986 was Tracey Fitzgerald. She then went to UCC to study music and directs the adult choir in Adare. We are planning to bring the choir to America in 2008 and have them sing in all the same churches that we went to in 1986,” he said.

Fundraising for the trip will be done here in Limerick and the choir will raise more funds for causes such as the Southill Junior School.

“Limerick is like home. I walk down the street and people know me. When I do fundraisers in Boston, there might be 500 people there and sometimes on the street people will come up to me and ask me about the kids in Southill. Everyone wants to make a difference and in the overall scheme of things I feel we have been blessed to be involved in the area,” he said.